A few weeks before setting off to Rome I’d read a few amusing news stories about ‘gladiator fights’ happening outside the Colosseum. Apparently the gladiator impersonators had formed gangs and were using violence and intimidation against other would-be gladiators, as well as against tourists to force them to pay up for photographs.

In response, the Italian police sent in agents, undercover in gladiator costumes and togas. Sure enough, a ‘sword fight’ did ensue, other undercover police then stepped in to make arrests as reported by The Guardian and the BBC.
END_OF_DOCUMENT_TOKEN_TO_BE_REPLACED

I slip in the time to post here just in the gap I have between passing my Driving Theory Test and frantically starting to pack and prepare for leaving for university on the 2nd October. Perhaps before I launch into my ramble about my very Hepburn-esque Roman Holiday I will post some little fillers to videos, articles and other time fillers of the week.

What I’ve been listening to: 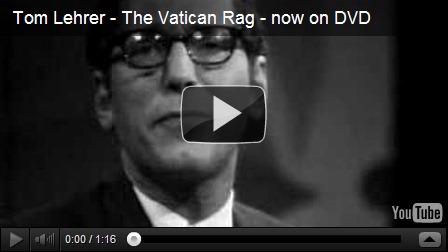 Tom Lehrer’s “The Vatican Rag” got me in the mood for visiting the real thing last week. 2-4-6-8 time to transubstantiate!